Why does the M10 Bus Exist if there are multiple faster train lines along the same route?

Evaluating bus routes in NYC based on Google Maps directions

I noticed that Google Maps never recommends I take the bus. Is it because I live and work in areas that are close to subway lines? In a constrained and existing system, how should we think about allocating transit routes? In this post I look at using Google Maps directions as a tool for detecting overlapping service and for doing transit planning.

Wikipedia has amazingly detailed articles (here and here) which detail the history of transit in NYC. Present day NYC shows its history in its design; Broadway follows a Lenape route and numbered and lettered subway trains are of different incompatible widths because of their separate histories. Throughout NYC transit history there is dual control between government and private companies. The New York and Harlem Railroad was the world’s first street railway and was privately funded and designed but with governmental approval. In 1894 the Board of Rapid Transit Railroad Commissioners laid out routes and franchised to private companies. For busses, the Fifth Avenue Coach Company and its predecessor appear to be the first bus-like transportation in the city starting in 1885 and running along 5th avenue. The bus companies appear to have proposed routes in applications for franchises to the city which were changed or granted based on other transit routes, backroom dealing, and corruption. The history up until the middle of the 20th century is marked by competition from different types of transit and different companies with tradeoffs in routes, fares, and travel times. But by the 1960’s the city was on its way towards complete public control through the MTA.

Currently the MTA is in the midst of a periodic bus redesign however strangely the MTA bus redesign does not mention subway trains. Currently the Bronx bus network has been redesigned with the other boroughs plans ongoing. In the MTA video a very manual process is described that doesn’t seem to take into account the obvious, the subway, or the tradeoffs in dollars spent which all seems very strange considering the agency’s financial situation.

Google Maps as a Tool:

I am a lifelong New Yorker and remember the days of tokens and paper maps. But for me and I would guess many New Yorkers, Google Maps and other automated trip planners are how we pick transit routes.

I created a program to randomly generate 10 thousand pairs of points in NYC: hypothetical start and end points for a trip. The pairs vary in how far apart they are. Some pairs are across the city from each other, others both in the same borough, and others within the same 3 mile radius. 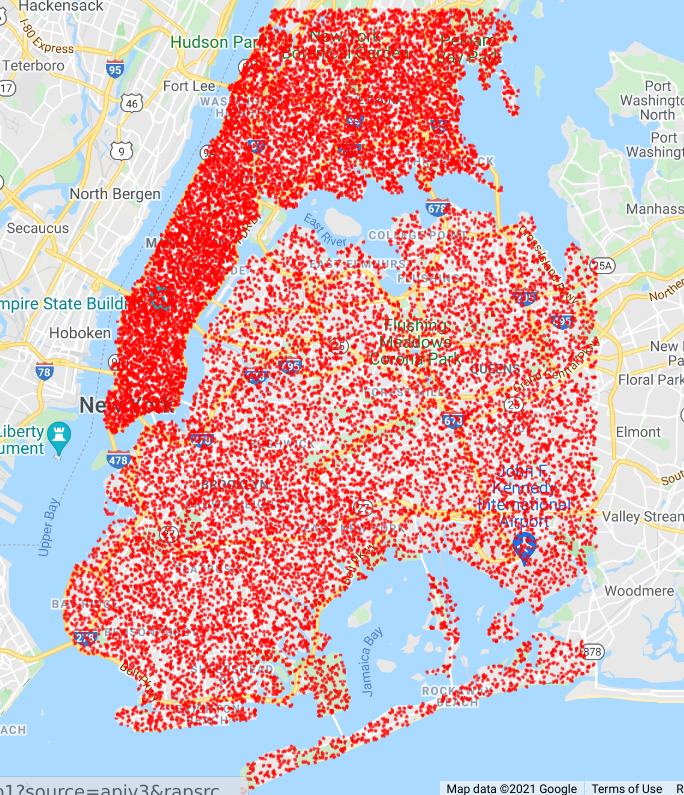 With these 10 thousands points, I queried the Google Directions API which is the trip planner used by Google Maps for directions. I simulated traveling between the two points on a weekday morning.

For the below map, I went through all the trips and looked for cases where the bus was more than 5 minutes quicker than any other public transit option. In these cases, I mapped the bus route. The more trips the darker the route. Under this thought experiment, if all riders were able bodied and optimized for transit time only, you could remove all bus lines besides those shown and you would not increase the transit time of any commuters. 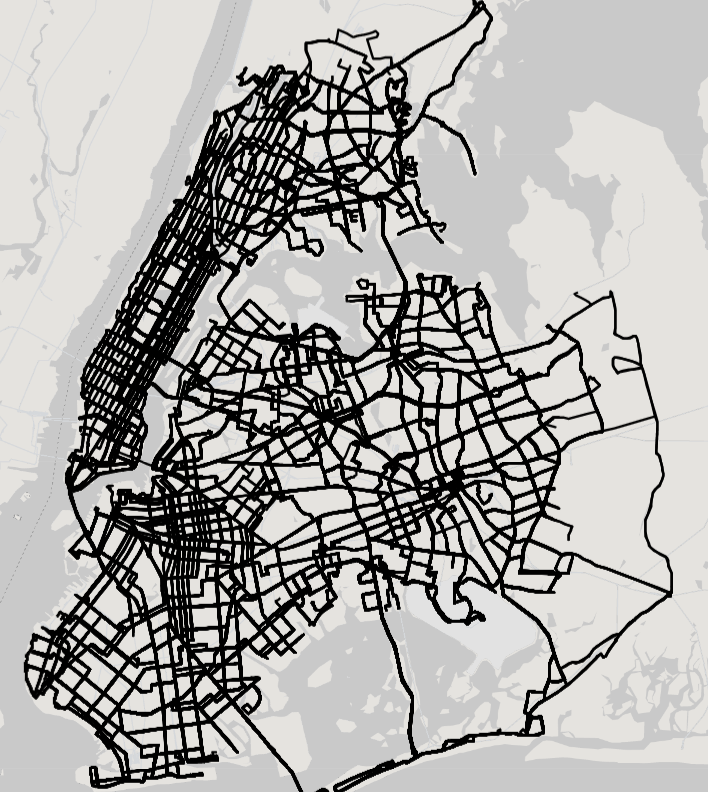 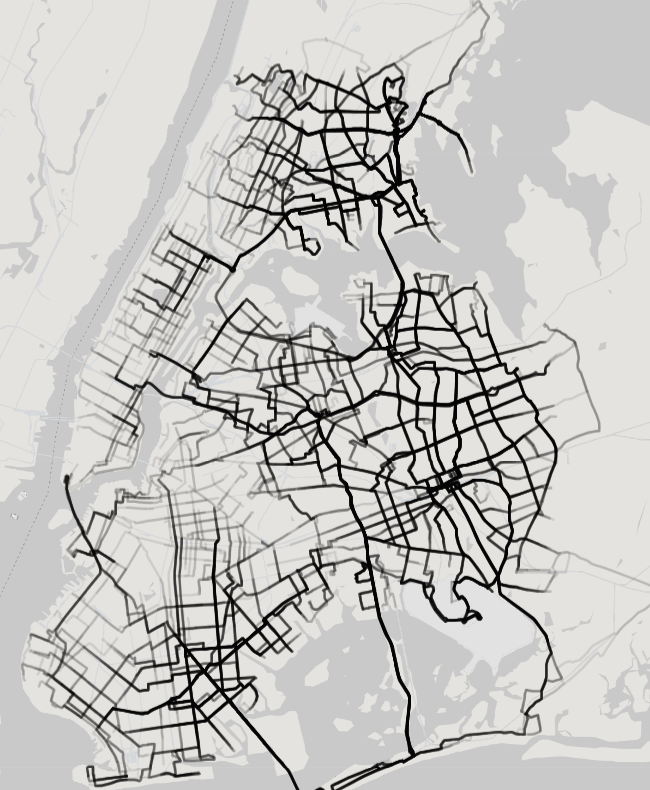 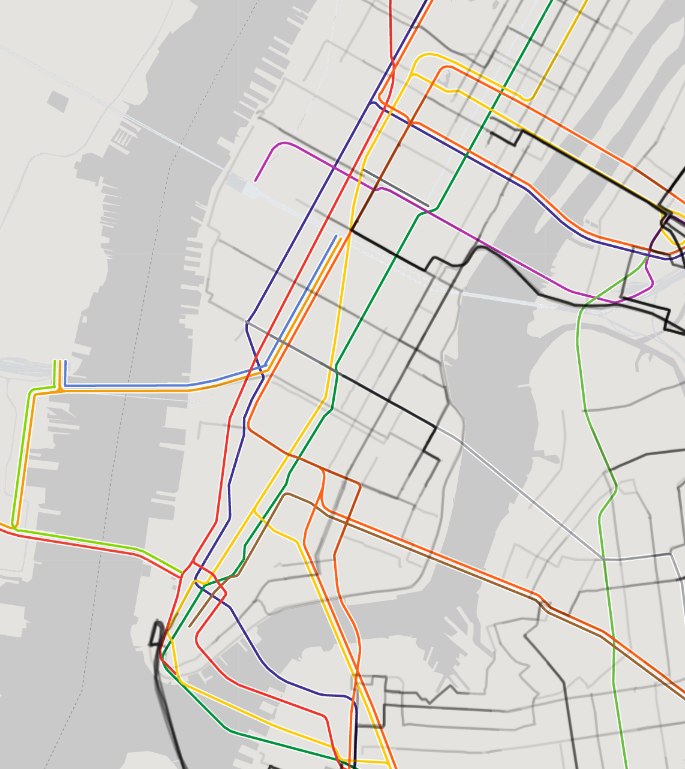 Let’s look at the M10 Bus as an example. You can see via the NYC bus map that the M10 Bus goes from Columbus Circle up CPW/FDB to 155th. Along the majority of its length it is directly above the A,B,C,D trains. Above 121st it’s a block away from the same train lines. And if we look at the map generated from Google Maps directions, the M10 is never recommended. Looking at 2019 NYC MTA ridership we see an average weekday ridership for the M10 of only 5k weekly riders with ridership decreasing 15% from 2018 to 2019. 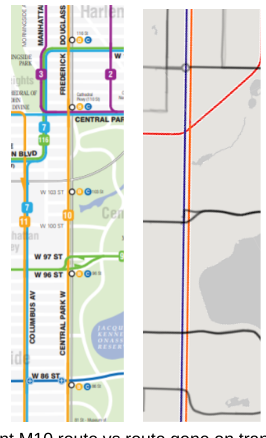 The story is similar for many other bus lines that run for their majority along major subway lines for instance the BX1/2 which besides small portions in kingsbridge and mott haven travels along the same line as the B/D on the grand concourse in the bronx. Or the B25 in Brooklyn which runs along the A/C except for a small portion in dumbo.

We can see the importance and the need for more busses when we look at areas with few subway options. For instance in the Bronx, the highest ridership is the Bx12 which travels east to west providing indispensable transportation. Or the Brooklyn B82 which is similarly important.

There is a clear need for more busses in outer boroughs where the current transit density is poor and most likely causally the housing is also less dense. 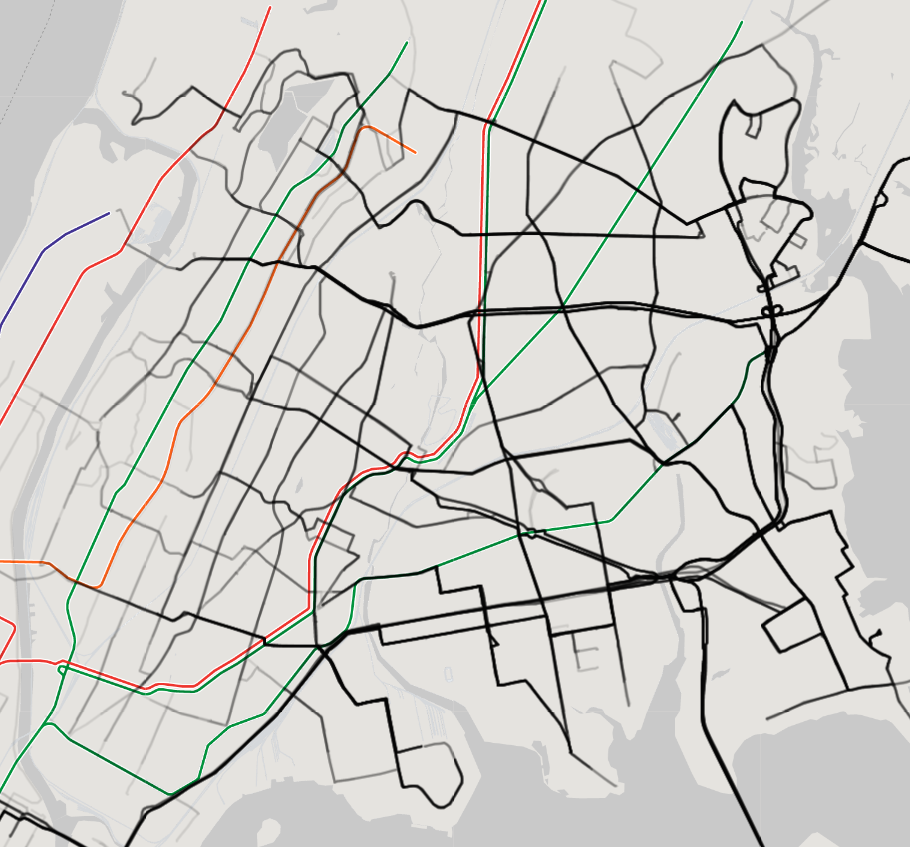 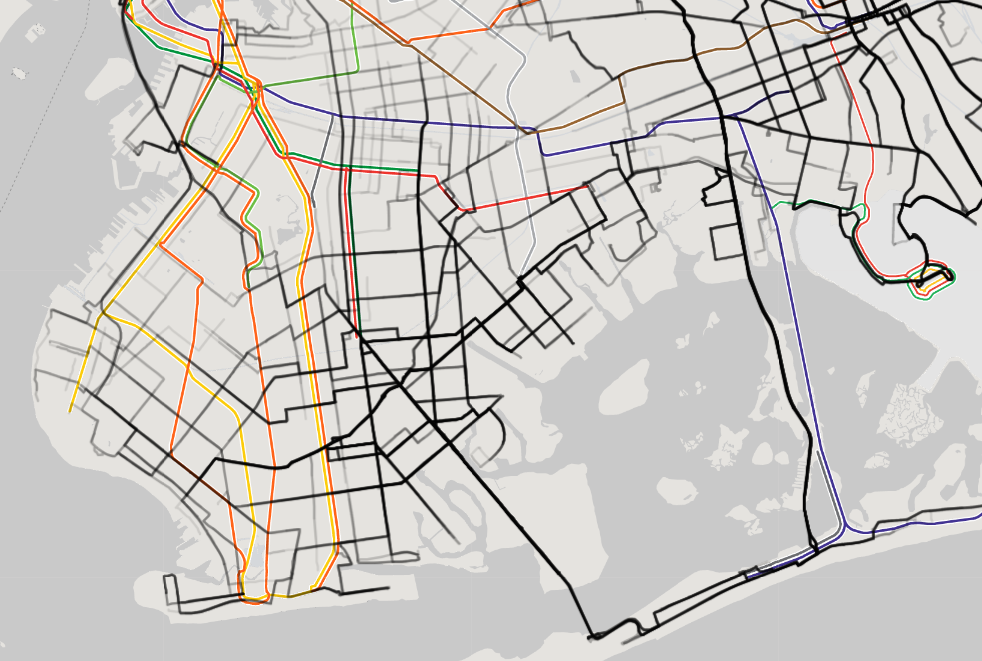 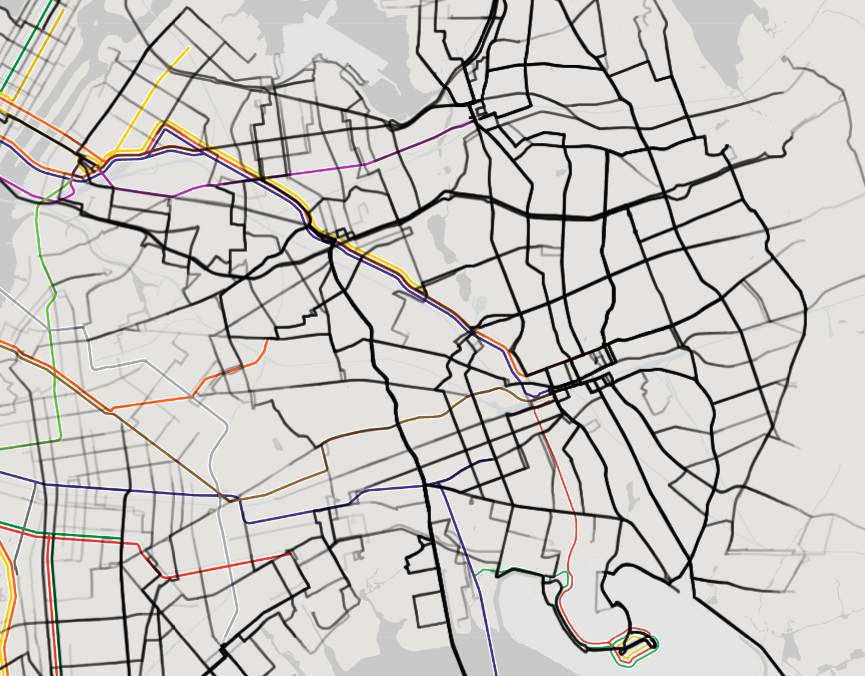 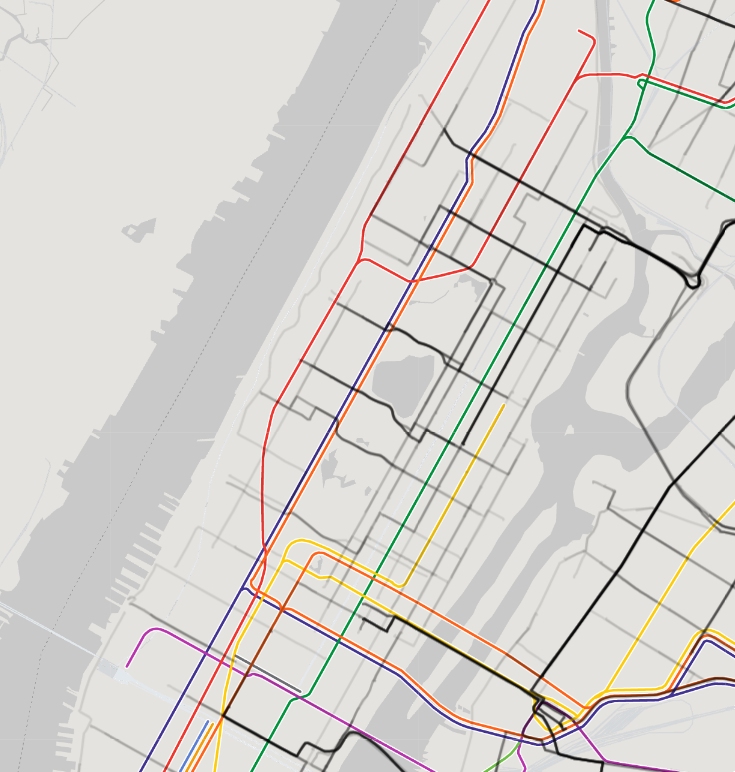 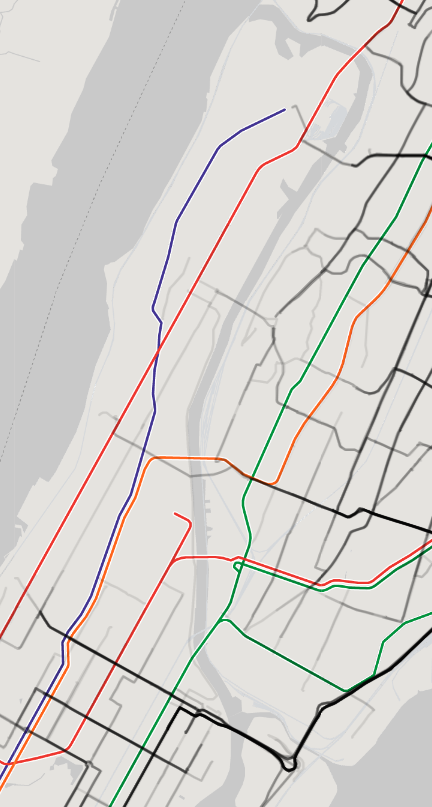 How would you redesign a bus system?

As stated in the introduction I would suggest the goals for the transit system should be to expand low cost transit throughout the region and lower transit times.

Contrary to the MTA redesign website, “It all begins with wiping the slate clean and starting from scratch,” ignoring billions in existing infrastructure, commuter preference and history is a terrible way to start. It reminds me of the famous software question of the big rewrite, do you rewriting everything or refactor. Rarely if ever is the blank slate the starting point, instead you want to make thousands of small refactoring changes instead of decade long redesigns.

The task of redesigning is as much a political question as it is a systems engineering question. Begging to consider tradeoffs and you are quickly considering racial, socioeconomic, age, environmental and more questions. Is this central planning? Is the redesign racist? Ageist? Disablism?

We have an imperfect transit system which amplifies the inequities of our society and history. To change it, create an open system with clear tradeoffs and iterate over a thousand small steps instead of giant leaps.

In the literature I can already see some algorithmic approaches to bus map designs such as here and here. I would work to create an open algorithm which takes in a few inputs and uses a objective function / loss function to quantify each map against the prime goals of access to low cost transit and transit time. Researchers and interested individuals could iterate on the functions, inputs, and generated maps.

You can play with a version of the map